To carry out this project which was completed ahead of deadlines .  ITP supplied and installed :

ITP have the capabilities to design , supply , install and manage complete Business Technology Projects including IT Connectivity , Data and Telephony. This removes the hassle as well as creates a single point of contact for all the vendors and sub-contractors.

This is your opportunity to tell us about the recruitment and skills needs of your business!

To help ensure that the council’s skills investment work meets the needs of local businesses we are undertaking a borough wide employer skills survey. This will help us better understand the recruitment and skill needs your business requires to grow and prosper.

The survey will only take 10 minutes to complete and involves a range of questions – mostly multiple choice – about your business.

The survey can be found at http://bit.ly/suttonbusinesssurvey and will close on 6 February 2015.

The information we gather will be held confidentially.

Thank you for taking part in the survey! 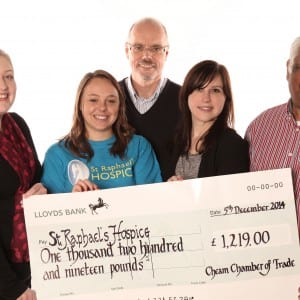 The Committee of the Cheam Chamber of Trade proudly handed over £1,349 to Emily Nicholls of St Raphael’s Hospice Fundraising Team.

– Pictured with Emily are some members of the organising Committee Jennie Watson (Village Travel), Tom Goodliffe (Cheam Sports), Leanne Officer (The Closet) and Alex Rocha (The IT Partnership).

– These were the proceeds from the raffle (drawn by Paul Burstow MP), the stalls, donations offered for photographs of the princesses from Disney’s ‘Frozen’, and a collection organised by John Fraser Jenkins of Cheam.

– All of this was the result of organising Cheam Village’s traditional Late Night Shopping Evening on the first Friday of December.

– 2013 had been the first year raising charity money at the event, and 2014 saw a doubling of the donation to the local hospice.

– The event could not have been staged without enormous assistance and sponsorship from the likes of Smith & Byford whose generous donation again enabled the enlivening attendance of Radio Jackie, Hire Service Shops for providing barriers, much goodwill from both local Ward Councillors Mary Burstow and Graham Whitham and the Area Committee, and the guidance and assistance from other Council officers.

– Fantastic help was also provided on the night by volunteer marshalls from the community, and local scouts.

– The local police team helped with the crowd control, and estimated attendance at the event to be around 3,000.

– The Committee of Cheam Chamber of Trade is keen to keep this event alive in the future, and is even considering a mid-summer event in early July, but always needs volunteers to help.

– Many of the shops, traders and charity shops saw a substantial boost to their takings on the day, and many others will benefit in the future from the exposure and goodwill that Cheam derives from the event.

There are still a few raffle prizes waiting for collection from Village Travel so please check your tickets….you may be a lucky winner!!!!